A misogynistic quote that was displayed on a middle school wall for five years has now been removed after the school received online backlash.

The quote “The more you act like a lady, the more he’ll act like a gentleman” was on the wall at the Gregory-Lincoln Middle School above the lockers. The author of the quote happens to be Sydney Biddle Barrows, who was once a businesswoman but is now an escort agency owner. 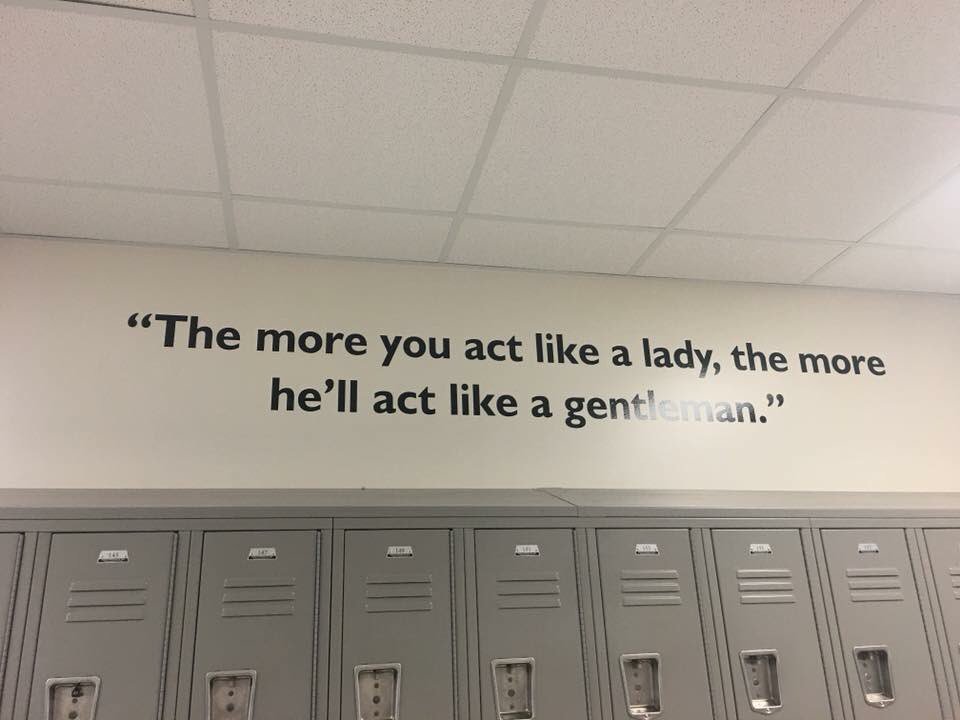 A woman named Lisa Beckman tweeted a photo of the quote Friday (August 17) and it went viral, receiving 18,000 likes.

The wall decal has now been covered with a fresh coat of paint after the school was harshly criticized for sending a message of misogyny to young women.

What does it mean to act like a lady anyway? Are they talking about promiscuity? Dress code? Language? Hair? No matter what the message is behind this quote, it is unacceptable to promote the idea that if girls don’t abide by a certain code of conduct that they do not deserve respect from boys. Plus, if the girl “doesn’t act like a lady,” is it okay for a young man to disrespect her? This quote reinforces patriarchy, the degradation of women and double standards and the fact that it was displayed on school grounds is disappointing.

It’s also irresponsible to send boys the message of “it’s okay to disrespect or violate a girl if I don’t like the way she acts.” In the wake of the #metoo movement, seeing a quote like this is disheartening and goes against the idea of empowering women and teaching boys to respect them. With a quote like this plastered on the wall, how can those girls believe that no truly means no?

We look to schools to teach the youth non-discriminatory ideas, not to rationalize sexism.

Tanay Hudson is a journalist and licensed psychotherapist who hails from Queens, New York. When she isn't writing for MadameNoire, she is doing psychotherapy in the East Harlem community with at-risk children and families. ​She's a proud HBCU graduate who received her Bachelors in Sociology from Norfolk State University, her Master of Social Work degree from New York University and her Master of Journalism degree from Hofstra University. She's also an active member of Zeta Phi Beta Sorority, Inc.Phi Zeta Zeta chapter where she does community service in the Queens, NY community. View all posts by Tanay Hudson